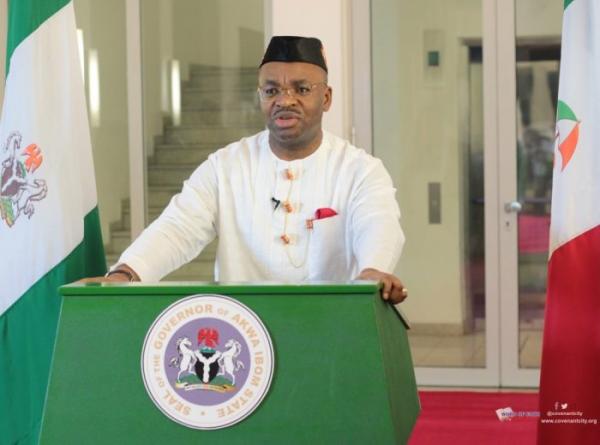 Uyo- Saturday July 2021: -Udom Emmanuel, the governor of Akwa Ibom, has declared the Peoples Democratic Party, PDP, has the wherewithal to reunite Nigeria and restore it to its past glory.

Speaking to journalists after the graduation ceremony of the El-Amin International School, Minna, the Governor said Nigeria was at its peak of economic glory when the PDP was in charge.

“I want to advise Nigerians that in 2023, let us return the PDP to government at the central and I can bet my certificates that the economy of this country shall return to its past glory.

“Once we come back to the central, we will build the economy of Nigeria because we are bridge builders and we will reunite Nigerians.”

The Governor argued everyone who had tasted the administration of the PDP can attest to the difference.

“If you have tested PDP and discovered they performed, why not try them again. You cannot change the winning team, we will do our best to bring back the glory of the country,” he stressed.

Speaking further about the Petroleum Industry Bill, PIB, passed by the National Assembly, the Governor noted the lawmakers were not fair to allocate three percent to the South-South region.

This, he said, is because the region is the worst affected by the effects and should have been given more consideration.

“We are not asking for too much but insisting on three percent is not fair to us. It is one thing to say these things but one thing we have realized is that people do not understand the impact this petroleum has cause our communities.

“Our fishermen can no longer earn a living because of oil spillage, a lot of communities are no longer farming because no more farmlands.

“The people need to come and see the devastating effect this has had in the communities. So it is not too much to give us five percent.”