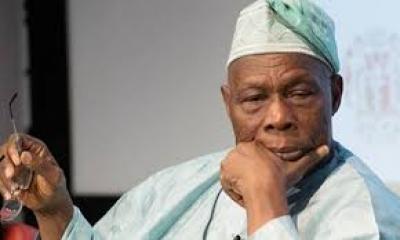 Obasanjo, who spoke at the 46th President Party of Abeokuta Club, held in Abeokuta, the Ogun State capital, explained that the cancellation of June 12 election had robbed off Egbaland the rare opportunity to have three of its prominent sons occupy the seat of the president at different times.

Baba of Africa, who was referring to himself, former Interim Head of State, Ernest Shonekan, and Abiola would have become the third, if 1993 poll was not annulled.

He disclosed that bad belle, that is hatred, had denied MKO Abiola from being the President.

Obasanjo was honoured a Trustee of the Abeokuta Club, a socio-cultural organisation of Egba people of Ogun State, while the late Philanthropist and Business tycoon was also awarded a posthumous vice patron of the club.

The former President remarked that the award bestowed on Abiola was well deserved.

“When Abeokuta Club was in the process of being birthed, things in Abeokuta were not as rosy as they are today. And the sons of Abeokuta who were in Lagos put their heads together in late Chief Sobo Sowemimo’s house to think of what they could do to improve the development of Abeokuta as a city. I pay tributes to all those founding members, those who have departed this world and those who are still here”.

“Kabiyesi, the Alake of Egbaland alluded to it. Normally, when you win a cup three times, you keep that cup. Isn’t it? If not for bad belle, Abeokuta would have produced President of Nigeria three times, in which case, we should have kept it permanently,” he stated.

Obasanjo therefore pledged to continue in his commitment towards developing the club, Ogun state and Nigeria.

The Alake of Egbaland, Oba Adedotun Gbadebo, while presenting the awards, described Obasanjo and Abiola as proud sons of Abeokuta adding that some “bad blood” didn’t allow Abiola become President.