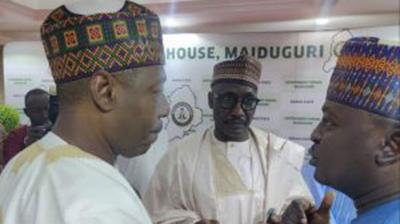 Maiduguri- Saturday 10, April 2021:The Group Managing Director of  Nigeria National Petroleum Corporation (NNPC), Alhaji Mele Kyari, has said that the corporation will partner with Borno State Government to establish a Gas Power Plant in the state.

The GMD disclosed this on Friday during a courtesy call on Governor Babagana Umara Zulum in Maiduguri.

This disclosure followed the vandalization of the national grid by insurgents which put the state into almost three months of blackout.

Kyari stated that the Federal Government will not fold its arms and neglect the state which is being ravaged by insurgents, noting that power is a source of income to the teaming people of the state.

“We are here with my colleagues, the Head of Gas and Power Business, Engineer Yusuf Usman, Representatives of Greensville Liquefied Natural Gas (LNG), which is a company that delivers Gas to our Power plants and industries across the country, officials from the Distribution Company of Nigeria among other stakeholders who are into the power business.

“Our essence of coming to Maiduguri is to join you to resolve the power problem in Borno, particularly Maiduguri metropolis and its environs in the next four months.

“It is Mr President Muhammadu Buhari’s cardinal principles to deepen gas power consumption in our country, particularly on our domestic markets.

“And that the easiest way to that is to deliver gas to power and to ultimately to industries. Mr President has declared this year as the Decades of Gas for the next 10 years. That means there is going to be sufficient gas entry into our domestic markets and industries.

“We have seen the opportunities and the challenges faced by the people in this part of the country, and it is pertinent to support your people have light restored back to this city.

“We as partners in the value chain have sat and talk to ourselves and agreed to team up to establish a dedicated power plant in Maiduguri which will serve the current need of power supply not only in Maiduguri but to other parts of the neighbouring cities.

“So we are glad to work with your Excellency to ensure that infrastructures needed for this project are provided within the shortest possible time.

“We are going to operate in a short term to see that within three to four months time restore power back to Maiduguri through the installation of the Gas power plant,” he said.

Governor Zulum , in his response, thanked the NNPC Boss and other delegations for the visit, especially robust partnership to restore power and hope to the Borno people.

He said “We are very happy to receive you for this important visit because power is very dear to us. “On behalf of Government and people of Borno State, we appreciate NNPC for the good support rendering to our people under your leadership as GMD.

“Since you assumed office as GMD, we have received tremendous support. A few months ago, you have performed a groundbreaking ceremony for the construction of 200 -bed capacity Infectious Hospital in Maiduguri, in addition to the ongoing construction of the Medical Diagnosis Centre.

“We have also received a lot of humanitarian support from some of your agencies, and we remain Internally grateful to you and your subsidiaries.

“Today’s event can change the entire narratives of our own state. Power is very essential. With power, we can reduce the magnitude of the insurgency, because millions of people are earning their means of livelihoods through the use of power.

“I have seen the agony our people went through during the nationwide fuel crisis, where entrepreneurs, especially market women and youths were trooping into filling stations queuing to buy some litres of petrol for their domestic or business usage.

“The ongoing insurgency has cut off the entire Borno from the national grid in the last two or three months. We put on all our efforts and restored it back, we have seen the joy and jubilation the people of Borno demonstrated after the restoration. But unfortunately, after 48 hours, the same group of insurgents went back and destroyed the main tower again.

“We have no other alternative than to source for other solutions, instead of relying on the gridlines, as it is very difficult to man the poles.

“That informed our decision to contact NNPC and other power stakeholders to come to our aid, and I am very glad to have you here for this purpose.”

Zulum, therefore, promised that his administration will do everything possible to support NNPC and all other agencies needed to establish a Gas Power Plant in the state.