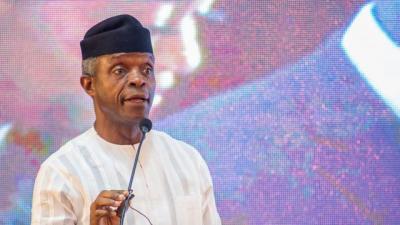 Nigeria- Monday 5, April 2021: Vice President Yemi Osinbajo has assured the people of Egedege in Ebonyi State of justice over the recent attack in the community by some gunmen.

The Vice President gave the assurance on Sunday during his visit to the affected communities in Ebonyi state.

Osinbajo, who was accompanied by the Minister for Information, Lai Mohammed and the Minister for State Mines and Steel, Mr. Uche Ogah, condemned the March 29 attack and promised palliatives from the Federal Government.

The Vice President, in his remarks, stated that: “I am here on behalf of Mr President, not just by myself. At times, when things like this happen, when people are killed, when incidents like this happen and we feel particularly outraged, particularly angry about what has happened, the reason being that the people who have been mercilessly massacred are people like you and I, human being like you and I.

“These are young ones, women and children, who have woken up in the morning expected to go about their daily business, expected to go out to fend for themselves and ended up dead not because they’ve done anything wrong but because of the cowardly wicked act of some other people who lived in the community they are.

Osinbajo, in assuring the elders and people of the communities on government’s plans to ensure that the dastard acts do not repeat itself, said it was very important to beef up security in the state, especially the affected communities.

The Vice President said he was already in talks with the General Officer Commanding (GOC) of the Army in the state about ensuring that more security was provided, while he informed the people that the GOC had already made some provisions, “but obviously there is need for even greater security,” Osinbajo said.

He also charged the people of the local communities to be ready to support the security operative with information on the activities of suspected people around them.

He said “The local communities themselves must be ready to give more information and prompt information to all of the law enforcement agencies so that prompt actions can be taken in the event that anybody wants to do any further harm.

Though, the Vice President said, “The community leaders have given me a list of phone numbers and some photographs, I think they are about four or five photographs of some people, I do not know, I cannot say weather these people are responsible.”

Hence, he promised that, that the incidents will be “investigated thoroughly,” adding that, the offence could not have been committed by three or four people, there must have been many others. I will make sure investigations are done thoroughly.”

He also informed that, “At the level of the National Economic Council (NEC), which is the meeting between the Federal Government representative (that I have the privilege of chairing) and all the Governors of the states are members, we’ve agreed on certain things where things like this had happened.”

The Vice President noted that at the NEC level, “We will jointly pursue justice; We will also make provisions as mush as possible between the FG and State Governments for those who have lost their lives and valuables on whatever can be done to help those communities.”