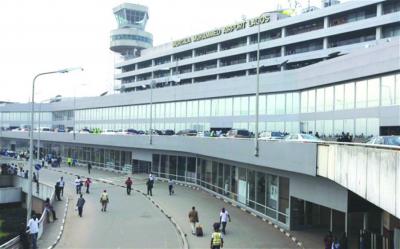 LAGOS- The Nigeria Police Force Murtala Muhammed International Airport (MMIA), Lagos Com­mand has arrested and parad­ed five Covid-19 certificate sus­pects at the airport, while two others are still at large.

The suspects at large are Shehu Imam and Adeola Da­lington who works with Sky Blue Services limited, a clean­ing service at the airport.

Briefing journalists on Thursday in his office at the airport, Mr. Bature Umar, the Commissioner, Airports Com­mand, said that the incident occurred on February 19, 2021 at the airport where a British Airways passenger, Michael Osagbogun was defrauded of the sum of N50,000 for Covid-19 test.

According to the Commis­sioner, one of the suspects had approached Osagbo­gun promising to produce a Covid-19 test negative certif­icate for him.

Two of the suspects, Popoo­la Adewale and Adeola Daling­ton, who knew the airport envi­ronment well due to the nature of their jobs at the airport, he said allegedly took the victim to one of the toilet facilities at the airport where the sum of N50,000 was obtained from him under the pretext of producing a valid Covid-19 negativecertifi­cate for the victim.

Umar explained that one of the suspects, took the vic­tim to DAT Cybercafe at No. 4, Oriyomi Street, Ikeja where a fake Covid-19 positive certifi­cate was eventually procured for him.