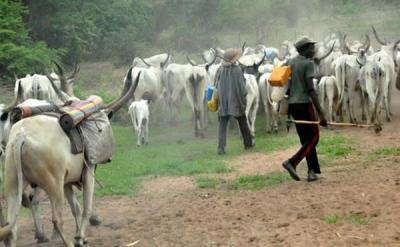 The people of Oro land in the Irepodun Local Government Area of Kwara State have given a seven-day ultimatum to herdsmen in Okerimi-Oro community to evacuate the community.

The community under the aegis of Oro Descendants Union issued the quit notice in a statement titled, ‘We reject unlawful occupation of land in our community by Bororo/Fulani,’ which was signed by the National President, Alhaji Uthman Balogun, and National Publicity Secretary of the union, Mr. Kayode Adeyipo.

It was stated that the herdsmen allegedly evicted from Oyo State, had occupied Okerimi-Oro community in last week of January, 2021.

Oro people are the kinsmen of the Minister of Information and Culture, Alhaji Lai Mohammed.

“The site where the Bororo/Fulani herdsmen are occupying now is part of Koshoni-Ola Farmland in Okerimi-Oro. Everyone became scared, nervous and agitated, demanding that they should be sent away from our locality because of their reported, evidence-based nefarious activities, which included kidnapping, maiming of innocent citizens, robberies and destruction of farmland. And to our knowledge, it is not the company that invited them.

“The signed document had with the Aala of Ilala community and Baale of Buari community, the signatures of nine leaders of Bororo/Fulani, Seriki Fulani in Ajase-Ipo and Chairman of Miyetti Allah in Irepodun Local Government Area.

“The peace pact was witnessed by zonal heads of security agencies, including Nigeria Police Force, Department of State Security and Nigerian Security and Civil Defence Corps (NSCDC),” the group added.

It noted that everything was without the knowledge of the people of Oro land, adding, “We are not party to it and we can’t be a party to any of such arrangements. Our people are vehemently against it, they had long kicked against it.”

Describing the act as disheartening and disgusting, the union said, “Can a house owner collect rent from anyone and direct the person to another man’s house to be received as tenant after signing tenancy agreement with him (i.e. the payer)? Buhari and Ilala are not part of Oro.

“We now implore Buari and Ilala to come and relocate Bororo/Fulani to their own land, which must be far away from our vicinity. And this must be done on or before the expiration of seven (7) days counting from today, Tuesday, February 16, 2021.”

Umahi reacts to killing of 15 persons by suspected herdsmen in Ebonyi community, traces of the spons...
Read More...