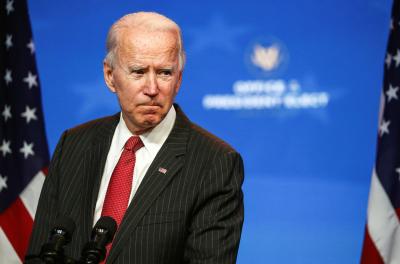 US President-elect Joe Biden will announce his first Cabinet picks on Tuesday, two key members of his transition team said, despite President Donald Trump continue denial of the legitimacy of Biden';s win.

Biden has gone ahead with preparations to assume the presidency on January 20, regardless of Trump’s bid to undo the results of the November vote.

“You are going to see the first of the president-elect’s cabinet picks on Tuesday,” Biden’s chief of staff, Ron Klain, told ABC’s “This Week” on Sunday.

Several US news organizations, including Bloomberg and The New York Times, reported that the president-elect will nominate seasoned diplomat and long-time aide Antony Blinken as secretary of state.

Biden last week said he had already decided his pick for the key position of Treasury Secretary.

US media also widely reported he will name Linda Thomas-Greenfield, who served as assistant secretary of state for Africa under President Barack Obama, as his UN ambassador.

An increasing number of Republicans have either recognised Biden’s victory or at least urged the General Services Administration, the usually low-profile agency that manages the federal bureaucracy to release federal funds for the Biden transition.

With Trump refusing to acknowledge the election outcome, Biden and his top aides have been denied briefings on sensitive domestic and foreign policy issues — most urgently the coronavirus pandemic battering the country.

Former New Jersey governor Chris Christie, who in 2016 advised the Trump transition, said on ABC that the president’s legal team was a “national embarrassment.”

Maryland Governor Larry Hogan, another prominent Republican, told CNN that Trump was making the country look like a “banana republic,” later tweeting the president should “stop golfing and concede.”

Trump has golfed on every weekend day since the election, though he took part virtually in the conference of the G20 leading economies this weekend — skipping a Saturday session on the pandemic.

And even Representative Devin Nunes, an ardent Trump loyalist, conceded backhandedly on Fox News that Biden had “run a successful campaign from a basement.”