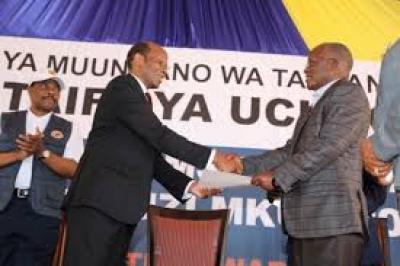 Tanzania’s President-elect John Magufuli , who according to the electoral body on Sunday won 84% of the vote while rival Tundu Lissu of the Chadema party received 13%, affirmed his win and announced that he has no intention of seeking a third term.

While receiving his certificate of victory, Magufuli appealed to the nation, "We cast our votes in a peaceful way, we also witnessed Tanzania receive the results in a peaceful way, this has proven to the world that Tanzanians are mature when it comes to elections and democracy, but we have also proven to the world that Tanzanians love peace. Now that the election is over, it is time to go back to work."

“The landslide victory given to me in the elections by Tanzanians is a huge debt that I have to repay by working hard day and night in resolving challenges facing them,” Magufuli said shortly after he was presented with a certificate of victory by the Chairman of the National Electoral Commission, Semistocles Kaijage, in the capital Dodoma.

Magufuli said the victory was not only for the ruling party but it was for all Tanzanians, adding that he will serve all Tanzanians regardless of their tribal, religious and political affiliations.

Headlines (Tanzania):
Read our other news items below...

Tanzania to use local herbs instead of vaccine Covid-19