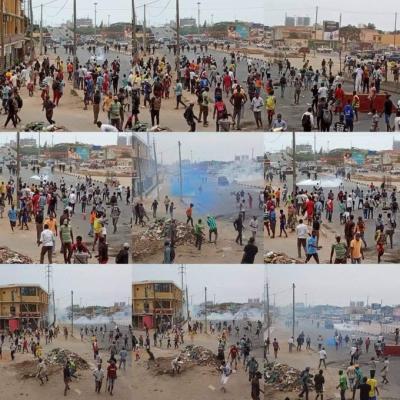 Anti-riot police fired teargas and beat protesters to break up the demonstrations that attracted around 2,000 people.

Some protesters set up barricades along the roads using skips, boulders, tree trunks and burning tyres while some others set a national flag ablaze.

The government, in response to the protests, arrested dozens of protesters, including journalists covering the demonstrations.

The interior ministry secretary Salvador Rodrigues, said on state television that 103 people, including politicians from the largest opposition UNITA party, were in detention and were due to appear in court on Monday.

Rodrigues said that six police officers were injured and a police motorcycle, a car, an ambulance and fire engine were damaged or burnt during the protests that occurred in a working class neighbourhood on the outskirts of the oceanside capital Luanda.

Demonstrators were demanding jobs and better living conditions as well as a new date for local government elections that were due this year, but have been delayed due to the coronavirus pandemic.

In a statement on Sunday, the main opposition UNITA accused police of using excessive force to quell the protests and demanded the “unconditional release” of all the arrested people.

UNITA “denounces and condemns the arrest and beating of demonstrators by the national police, which caused chaos on the street…, which was avoidable had the march processed without police brutality”.

Saturday’s protests were the latest show of displeasure towards the government by Angolans in recent months.

Headlines (Angola):
Read our other news items below...