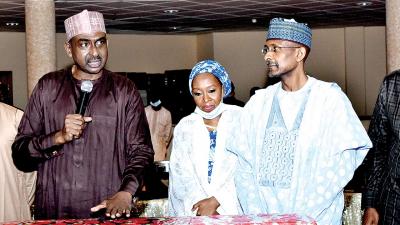 The Director of Finance and Accounts, Bashir Alkali, who has recently been appointed as Permanent Secretary, has left the Presidential Villa, Abuja, after a five-year period of service as finance boss.

The Deputy Director (Information), State House, Attah Esa, in a statement yesterday said the a send-off dinner was held over the weekend in honour of Alkali who is to resume as Permanent Secretary, Ministry of Humanitarian Affairs, Disaster Management and Social Development, this week.

In the statement, titled, ‘State House bids farewell to the director of finance,’ Esa  stated that members of staff of the State House, led by the Permanent Secretary, Tijjani Umar, bade Alkali farewell at the dinner attended by three retired permanent secretaries of the State House, management staff and some senior presidential aides.

He added that the 57-year-old Kano-born chartered accountant was posted to the State House in August 2015 as DFA and worked in that capacity until August 2020 when he was appointed as a permanent secretary.

“He (Alkali) was a consummate, calm, confident and without a doubt, diligent officer. He was also courageous and caring. He was on top of his game, meticulous, engaging, strategic, and a classic problem solver,” Esa quoted Umar and added that the immediate past Permanent Secretary State House, Mr Jalal Arabi, said that he had no doubt Alkali would prove his bravery in his new position.

In response, Alkali appreciated both the serving and retired colleagues in the civil service for the goodwill, prayers and best wishes to succeed in the new assignment.

No warehouse in Ogun was looted, stop tarnishing the image of governors- Gov. Abiodun...
Read More...