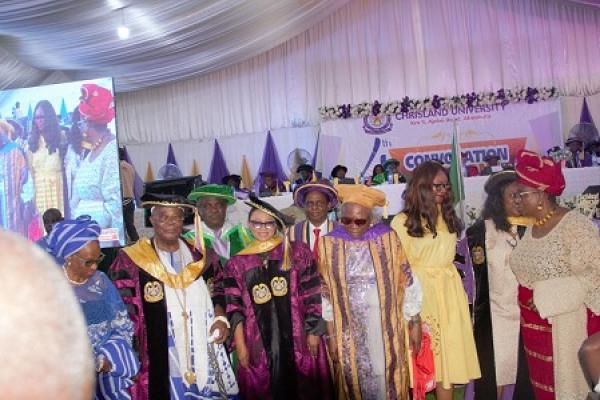 Chrisland University, Abeokuta has held its 4th convocation ceremony; the event, which also marked her 7th year of existence, saw her awarding first ever honorary doctorate degrees to two outstanding individuals in the country; the university also ranked 9th among private universities in the country and 17th among all, in the latest rankings by the National Universities Commission (NUC).

The convocation ceremony which was held between November 7 and 9, had its main event on the 8th, which began with the commissioning of the College of Law building by the Chancellor of the school, High Chief (Dr) Winifred A. Awosika (OON), followed by the naming of the major road on the campus after the Alake and paramount ruler of Egbaland, HRM Oba Michael Adedotun Aremu Gbadebo, Okukenu IV (CFR).
The ceremony saw crème de la crème from all walks of life gracing it, including the wife of former President Olusegun Obasanjo, Chief (Mrs) Bola Obasanjo, the wife of Governor Dapo Abiodun of Ogun state, Mrs Bamidele Abiodun, the Governor himself, represented by his Special Assistant on Education, Science and Technology, Prof. Joseph Odemuyiwa, Nigeria’s Minister of Education, Mallam Adamu Adamu, represented by Prof. Olusola Kehinde, numerous traditional rulers, vice chancellors of several universities, Permanent Secretary, Ogun State’s Ministry of Agriculture, Mr Sorunke Dotun, among others.

In her remarks, the First Lady of Ogun state, Mrs Abiodun noted that the school has been doing excellently well in promoting learning, research, morality, ethics, leadership, entrepreneurship and innovation, while thanking the entire staff and management of the school for their good works.
“Chrisland University is doing well and I must commend the staff and the management for ensuring that the students uphold the highest ethical standard. I say well-done to you for promoting academic excellence and ensuring that the next generation remains inspired to change the world. I am impressed by the remarkable strides of this institution,” she said.
The Chancellor, High Chief Awosika, who was overwhelmed with joy over the relentless strides of the Vice Chancellor (VC), Prof. Chinedum Peace Babalola, thanked her for accepting the extension of service; Prof. Babalola’s tenure as the VC had just ended last week.
High Chief (Mrs) Winifred Awosika further extended her abounding joy to all and sundry, including the Governor, former President Obasanjo, the Alake of Egbaland, Vice Chairman, Famfa Oil Ltd, Apostle (Mrs) Folorunsho Alakija, the Board of Trustees, the Governing Council, the convocation lecturer, the invited guests, members of staff, well-wishers, students and parents for their unflinching contributions to the growth of the school.

She further declared that the school will continue to offer employment opportunities to her first-class graduates, who are interested in going into the academia, while announcing that one of her own, Miss Hannah Favour Ubong, has been employed as a graduate assistant in the University.
The Pro-chancellor and Chairman, Governing Council of the university, Prof. Ayodeji Olukoju (FNAL) also added his voice to the river of thanks flowing at the event, as he noted that the successes being recorded in the institution is as a result of collaborative effort.
The Vice Chancellor, Prof. (Pharm.) Chinedum Peace Babalola (FAAS, FAS)who had earlier announced that two buildings were commissioned a year ago, during the commissioning of the College of Law, thanked the Board of Trustees for finding her worthy of extension of service, in what could be regarded as the most emotional moment of the day.
She noted, in an exclusive interview with CEOAFRICA that the additional years of service granted to her is to enable her to consolidate what she has started, to ease the work of her eventual successor(s).
Prof. Babalola advised the latest graduates to leverage collaboration in bringing their ideas and skills to fruition, while noting that the prize for innovation, meant to promote ingenuity in business startups, courtesy of her humble self and her heartthrob, Ven. Collins Olufemi Babalola, would go to Mr Victor Omoni of the Department of Computer Science.

“Today, the prize winner for ‘Innovate Chrisland’, which my husband and I endowed, will go to Mr Victor Omoni of Computer Science, who scored the highest in the evaluation of his entrepreneurial skills and business plans.
“Do not go to where the path may lead, go instead to where there is no path and leave a trait,” she said.
She further charged them to appropriate and maximise the benefits of partnership; according to her, “partnerships really help”.
She noted that some tech companies in the world, ranging from Paystack, Flutterwave, among others leveraged the prospects of partnership and rose to the global scene.