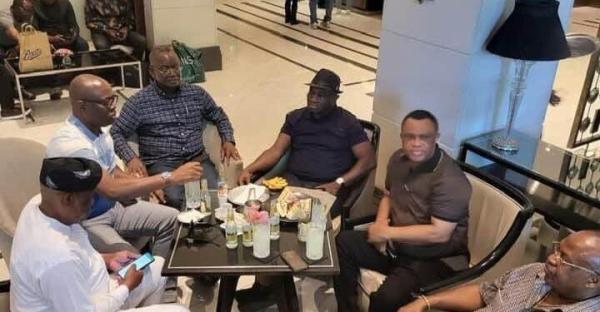 Benue State governor Samuel Ortom has said his Rivers State counterpart Nyesom Wike and other Peoples Democratic Party (PDP) governors who were aggrieved over the presidential running mate saga would not dump the party.

Ortom said Wike and the other governors agreed after a meeting in London that they won’t defect from PDP. Atiku’s choice of Delta State governor Ifeanyi Okowa had infuriated Wike and some of his colleagues. Wike had emerged a favourite of key members of the party to emerge Atiku’s running mate.

In what seemed like a protest, Wike and some other PDP governors, including Seyi Makinde of Oyo, Okezie Ikpeazu of Abia had stayed away from party activities, including the recent governorship election in Osun which PDP won.

But Ortom who featured on Arise Television programme, “The Morning Show,” yesterday, revealed that while in London he met with Wike and the other governors and that they resolved not to leave the party.

He also said the PDP presidential candidate, former vice president Atiku Abubakar has agreed to reach out to Wike to pacify him over the saga. Ortom added that Atiku asked him to persuade Wike for the reconciliation meeting to hold.

Stressing that he would be pacified, when Wike is pacified, the Benue State governor added that Wike remains a factor in PDP having sustained the party all through the period most party members left.