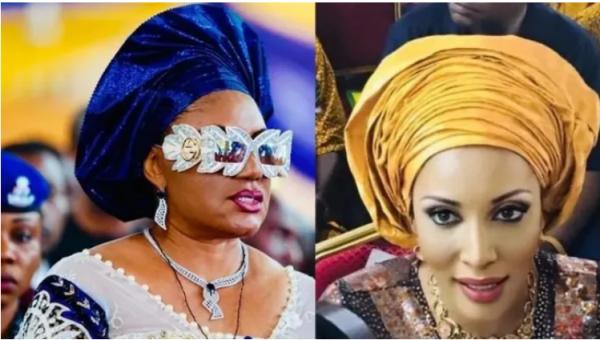 “A farewell Slap!!! What a disgraceful ending, as Obiano's wife collect hot slap for not minding her business”- Nigerians react to fight between wife of the outgoing Governor of Anambra State, and Bianca Ojukwu, at Soludo’s swearing-in ceremony
By: News Editor
Thu, 17 Mar 2022   ||   Nigeria,

Nigerians on twitter have reacted to the fight that ensued between Mrs Elebechukwu Obiano, the wife of the outgoing Governor of Anambra State, and Bianca Ojukwu, the widow of the late Chukwuemeka Odumegwu-Ojukwu during the swearing-in ceremony of the new Governor of the state, Prof. Chukwuma Soludo.

According to report, Obiano’s wife confronted Bianca, accusing her of not wanting the husband to be Governor while calling her a bitch

In retaliation, Mrs Ojukwu stood up and slapped her leading to a fight.

The unfortunate spectacle drew the attention of security agents and some personalities who pulled Mrs Obiano off the hold of Bianca who was visibly shocked at the action.

The drama caused a temporary commotion at the venue as guests ran helter-skelter before normalcy was restored and Obiano’s wife was moved out of the venue.

While some described the sad incident a disgraceful ending, others hail Lady Bianca, Wife of Ikemba Nnewi, Late Chief Odumegwu Chukwuemeka Ojukwu for carrying out such act.