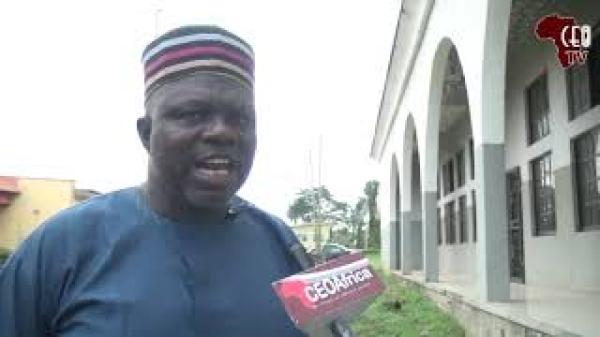 The management team of the Federal College of Animal Health and Production Technology, Ibadan led by Dr Adekoya Olatunde Owosibo , Provost/Chief Executive Officer of the institution organised a 3-day training/workshop which was put together to make the public Service Rules open to all the staff and management of the institution.

The training programme themed “Administrative Processes in Ensuring Enhancement and Improvement of Productivity,” was held from 16th to 18th February at Dr K.J. Nwufoh Hall of FCAHPT Ibadan.

The training was first  of its kind and  was packaged in order to sensitize the members of the staff on what their rights and limitations are as civil servant; breaking down the public service rules to them, talks on health issues and so many others.

In an Exclusive interview with the Provost/ Chief Executive Officer of the institution, Dr Adekoya Olatunde Owosibo, ably represented by the Deputy Provost and Head of the Human Capacity and Development Committee of the College, Dr.Ogunleke Funmilayo Oladunni, said that the college organised the training to equip the staff to better discharge of their duties in the college and to manage their health better.

Deputy Provost and Head of the Human Capacity and Development Committee of the College, Dr.Ogunleke Funmilayo Oladunni

Owosibo further said the training will guide the staff towards the forth coming promotion exercise.

According to him the college desires to ensure that the members of staff are properly trained so that they can better discharge their duties in the college. We want our staff to be well equipped for the task ahead in the college.

We are going to have a promotion exercise coming up next week. So, one of the reasons why we had to add public service rules to those things they were trained on was because it will formed part questions during the examination.

There is also health talk as a result of the loss of the lives of some of the staff in order for them to better manage their health.”

Speaking on the expectations from staff after the training, the Provost said the staff will perform their duties better, know their rights and be able to stand up for the ethics of their profession.

Dr.Owosibo reiterated that the management looks forward to having a healthier staff working relationship in the college, he further added that with the release of funds from the government, such trainings will be organised from time to time.

In a separate interview with CEOAFRICA, the Registrar of the Institution, Ven. Babatope David said the training was important as many of the civil servants may have forgotten the public service rules, which teaches them to known their rights and wrongs.

Babatope further said “The management of this organisation deemed it fit to organise this training so as to create awareness to the members of the staff. It is as if they have forgotten that the public service rule is still in existence.

So, we decided to create the awareness more in the staff, so that if any action is taken against anyone of them, they will not say that the management does not like them.

In as much as they know that the public service rule is in existence, they know their right from their left, they will not go against the rules, and they will work towards the fulfillment and development of the college.”

On the expectations from the staff after the training, Babatope said that optimum cooperation and obedience to civil rules and regulations from all staff is expected.

The Director of Laboratory services in the college, Alhaji Yusuf Hakeem Adebayo during an interview described the training as impactful, stating that since he was employed into service, such training has never been organised in the college.

He appreciated the provost, Dr Owosibo for his thoughtfulness.

He said “this is the first of its kind as we will like to thank the provost for this because since I started work here in 1991, we have not had this in the college.

The training focused on getting the work force aware of the rules and regulations guiding your activities when you are working with the government. It also enables us to know our rights and limitations. When you know your rights, you will be able to fight for yourself.

Kudos to our provost because many people that are bias will not want the work force to know their rights but when you see a God-fearing leader like our provost, he wants everyone to benefit.”

Alhaji Yusuf further stated that most of the things required of some officers and staff cannot be met but thanks to the training, they will be able to do better. He said:

He added “most of the officers nowadays do not know how to prepare memo, communicate and engage in interpersonal relationship. All these things were taught and it is a kind of buffer to make you more relevant and for you to enjoy your work in your place of establishment.

Most people are not aware about their health, the things we are not aware of are being discussed with us now in order to take care of our health and perform effectively.”