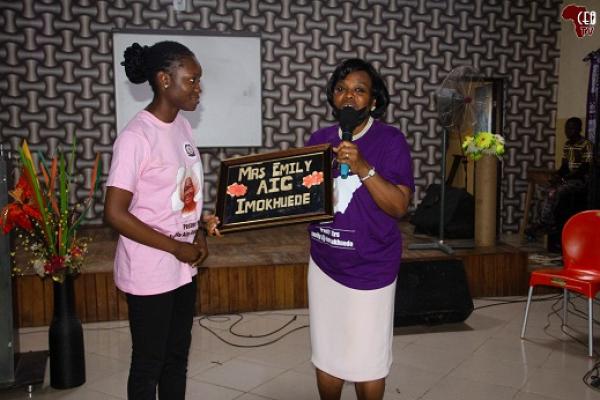 The entire management and Board of trustees of Chrisland University on Wednesday celebrated the memory of one of its own, Late Pastor Mrs Emily AIG Imokhuede.

Born on October 27, 1941, in Sabongida-Ora, the late Pastor Emily died peacefully in her sleep on the night of June 8, 2021, in Surrey, England. Since her death, an avalanche of beautiful eulogies, condolence messages and tributes have been pouring into the Aig-Imoukhuede family, a testament to the beautiful and accomplished life she led for almost 80 years.

The University, during the celebration of its 3rd Convocation ceremony, set aside a day to celebrate the life and times of the former President of NCWS and curator of National Museum, who until her demise was a member of the university’s board of trustees.

In her speech, the university Vice Chancellor, Prof. Chinedum Babalola, described late Emily Imokhude as a wonderful woman and one who served the nation diligently.

She said, “Today we celebrate this wonderful woman, a great Nigerian, and that’s why you see the map of Nigeria inscribed in our T-shirt with her face in it. We are celebrating her as a great Nigerian and she will forever be in our heart.

“Not only was she a friend to the Chancellor of our school but she worked in so many sectors in Nigeria, she was at some point a board member of the National University Commission (NUC), I remember when I was undergoing my interview as Vice Chancellor and I saw her and the Chancellor sitting together, so you can imagine her numerous contributions to education.

“It is because of this that the school has decided to name the female hostel after her as it will now be refffered to and called Pastor Mrs Emily AIG Imokhuede hall.”

The colourful event was brought to life when the Edo State cultural troupe performed to the delight of everyone present, churning out several traditional dance performances to which High Chief Dr. Winifred Awosika could not help but joins.

The Ogun state traditional dance troupe took the frenzy another step higher delivering several well choreographed dance routines and performances which got many of their seats including the VC, Prof. Mrs Babalola.

The Yoruba traditional dance troupe from Lawson Group of school also performed in celebration of the departed icon of education.

Students of Chrisland University also gave poetic recitations and artworks all describing the Late Emily AIG Imokhuede as an inspiration to the youth.

The Chancellor, Chrisland University, Abeokuta, High Chief Dr. Winifred Awosika, in her speech, said “We thank God for the opportunity he has given us to celebrate my sister and friend and I know that we shall continue to celebrate her not just today but forever. She will always be remembered with love.

“As our VC said in her speech, late Imokhuede was always here by my side and quite a number of us where involved in the establishment of Chrisland Group of Schools of which she is an integral part of.

“I have decided not to cry any more over her demise but to dance and celebrate and we shall always celebrate her.”