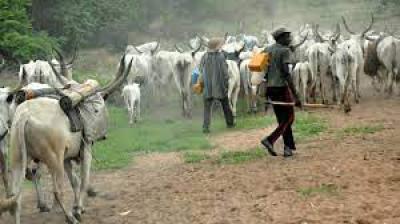 Southern govs to meet Buhari after France trip as MACBAN begs govs over open grazing’s ban
By:
Mon, 17 May 2021   ||   Nigeria,

Monday, 17 May 2021: Indications emerged on Sunday that Southern governors would meet with the President Muhammadu Buhari, after his return from France.

A source in the Southern Governors’ Forum hinted CEOAFRICA that arrangements were being made for the governors to present their resolutions at their meeting in Asaba, the Delta State capital, to the President.

Recall that governors in the 17 states of Southern Nigeria had on Tuesday held a four-hour meeting in Asaba, Delta State.

Also on Sunday, the Miyetti Allah Cattle Breeders Association of Nigeria demanded establishment of two or three models of ranches as part of measures to put an end to open grazing.
As part of their 12-point resolution, the governors led by the governor of Ondo State, Oluwarotimi Akeredolu, had said, “We observe that the incursion of armed herders, criminals and bandits into the southern part of the country has presented a severe security challenge such that citizens are not able to live their normal lives, including pursuing various productive activities, leading to a threat to food supply and general security.

“Consequently, the meeting resolved that open grazing of cattle be banned across Southern Nigeria.”

When contacted the Ondo State Commissioner for Information and Orientation, Mr Donald Ojogo, said the Chairman of the SGF and Ondo State Governor Mr Rotimi Akeredolu, had stated that the forum would meet with the President.

Ojogo said, “He (Akeredolu) has stated this already that the forum will meet the President and present the issues raised.”

Buhari on Sunday began a four-day official visit to France, where he would attend African Finance Summit.

According to the presidential spokesperson, Garba Shehu, the summit will focus on reviewing African economy, following shocks from COVID-19 pandemic, and getting relief, especially from increased debt burden on countries.

Also on Sunday, the Miyetti Allah Cattle Breeders Association of Nigeria demanded establishment of two or three models of ranches as part of measures to put an end to open grazing.

The General Secretary of MACBAN, Baba Ngerzema, who said this in an interview on Sunday, begged Southern governors over their ban on open grazing.

He urged the Federal Government to assist state governments in establishing model ranches.

Ngerzema said the governors should consider the plights of pastoralists that would be affected by their declaration, saying some of them were born and brought up in those Southern states.

He said, “For the interest of peace and unity of the country, the Southern governors should consider the plights of the pastoralists as bonafide citizens while agitating for the anti-open grazing policy because some of these herders are born and brought up in those states.

“In order not overheat the already fragile security situation of the country, let them all temper justice with mercy.

“We call on state governments to unify purposes in their desire for peace.”

He regretted that there was no attempt by past administrations to modernise the animal husbandry practice in the country.

He added, “The pastoralists we have are those that practise the primitive system they inherited as the only option available for them.

“This system is no longer sustainable considering the growing population that poses too much demand on the land that doesn’t increase at all.

“The pastoralists are also bonafide citizens whose rights and privileges deserve protection.