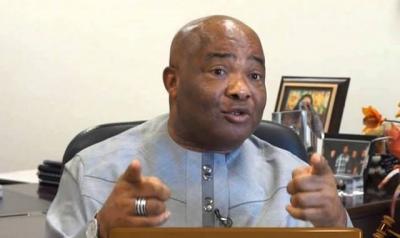 IMO- Sunday, 11 April 2021: Imo State Governor, Hope Uzodinma, has assured the northerners living in the state that he would give them the same protection and support he gives to his Igbo people.

The Governor gave the assurance during a meeting with the leadership of the Northern community at the Government House Owerri over the weekend.

“Every protection or support I can give to the Igbo man from Imo State I will also give to a northerner who is in Imo State.”

He reminded them that they voted for him overwhelmingly and government has a programme that will help them live well and conduct their businesses properly.

“This government has no time for nonsense. Don’t go for self- help. Government will help you. No arrangement by any person or group will be stronger than that of government.

“All we need from you is information. Pray for the souls of those who lost their lives,” the Governor said.

Uzodimma, who thanked the leaders of the northern community for their maturity and understanding of the events happening in Imo State of late, noted the development has nothing to do with herdsmen but the “conspiracy of some blood thirsty and greedy political leaders from the state working to ensure that state of emergency is declared in Imo State.

“They want to create impression that the people are fighting the northerners. But unfortunately their plans did not work and will not work. Blood means nothing to them and that is the difference between them and us.”

In his remarks, the leadership of the Northern community said they had come to pay a solidarity visit to Governor Uzodimma and to solicit his continuous support in the face of recent pockets of insecurity affecting them.