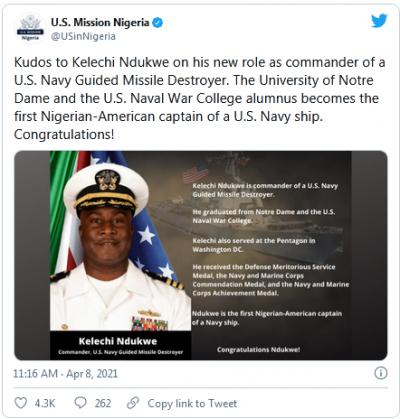 The United States Mission has congratulated a Nigerian-American, Kelechi Ndukwe, on his new role as commander of a US Navy Guided Missile Destroyer.

Kelechi, who graduated from Notre Dame and the US Naval War College, is the first Nigerian-American captain of a Navy ship.

He also served at the Pentagon in Washington.

@USinNigeria tweeted on Thursday, “Kudos to Kelechi Ndukwe on his new role as commander of a U.S. Navy Guided Missile Destroyer.

“The University of Notre Dame and the U.S. Naval War College alumnus becomes the first Nigerian-American captain of a U.S. Navy ship. Congratulations!”