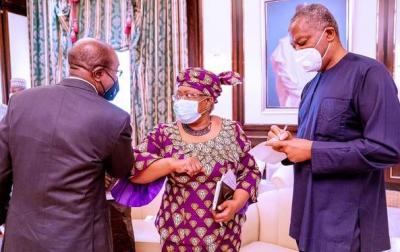 The European Union has written the World Trade Organisation (WTO) over the Central Bank of Nigeria’s ban of official foreign exchange for milk import, saying it distorts the balance of payment protocol.

The WTO Director General, Dr Ngozi Okonjo-Iweala dropped the hint in Abuja at a meeting with the CBN Governor, Mr Godwin Emefiele on Tuesday.

But the apex bank’s move seemed not to have go down well with European Union which wrote a protest letter to the WTO as a way of making it rescind its decision.

Commenting on the  development, Okonjo-Iweala said that the WTO has remedies which can be explored without banning things, yet protect local industries against dumping and cheap imports.

She said: “I understand Nigeria is trying to establish a trade remedies authority and I want to strongly support that so we can use those remedies as a tool to help our industries to grow because some of the issues I raised yesterday. We have complaint against us from the EU about the violation of the Balance of Payment to trying to protect the diary industry and they feel that this is not the right instrument.

“As DG WTO, I have to make this known but this is an issue, which you said, you will like to engage in a little more detail so we can discuss  later about it.  “I want to say that I think that we have what it takes in this country, particularly in our young people to do the necessary, which is to look forward as to how we are going to create jobs and move this economy in the direction that will support our youth in the future.

Why IAR&TAnnual Research Review is important to us -Obatolu...
Read More...