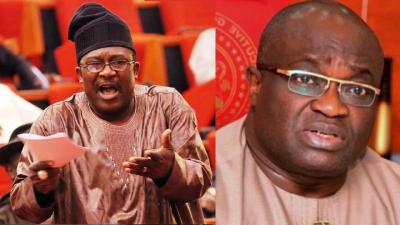 Abia State Governor, Okezie Ikpeazu, has said there is no need in chasing after a mad man that runs away with your clothe, lest you are tagged a mad man as well by the society.

Governor Ikpeazu, who spoke as special guest of honour during the launching of a book written by the Minority Leader of the Senate, Senator Enyinnaya Abaribe, titled: “Made in Aba”, described Senator Smart Adeyemi as a mad man.

He said there was no need to begrudge a mad man.

Ikpeazu cited the words of Professor Chinua Achebe who famously admonished that “if a mad man picks the clothes of a man taking his bath and runs away, if the man runs after the mad man, nobody will know who is mad.”

He further said he did not drink nor did he begrudge those who drink.

“I don’t drink at all. And I don’t begrudge those who do big issues. What you say, the things you say and where you say them speaks a lot about who you are. According to Chinua Achebe, If a mad man takes your clothes while bathing and you take off after him naked, no one will know who is mad between the two of you.

“I share in the joy of today’s event because I understand the place of history in the life of the people. The caption points to the tenacity that Aba exudes. Aba does not bother about taking a fall because it is sure it will rise figure, that is why we are better traders,” the governor said.

Recall that Kogi West Senator Adeyemi called the Abia State Governor ‘a drunkard’ while contributing to a motion titled,  “Urgent need for the Restoration and Revalidation of the Safe School Initiative in Nigeria” at the Senate.

Senator Adeyemi said “Despite that, some governors are doing their best, we are lucky to have a governor who has taken the issue of security as a serious priority. We are bordered by nine states, but we had an experience of the unfortunate incidents that are happening in neighbouring states.

“Some governors are committed to the protection of their people, in my state the governor awarded contracts for the renovations of schools and provides security services to them.

“In some states of Nigeria today, where we have highly intelligent people, highly educated people, very enterprising people, like Abia they are governed by drunkards. The governor of Abia is a champagne drinking man.