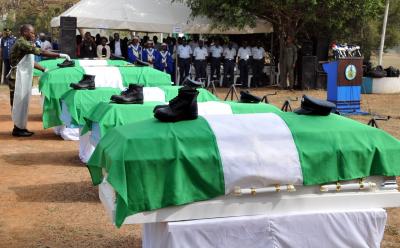 The funeral ceremony of the seven Nigerian Air Force personnel who died on Sunday has commenced at the National Military Cemetery in Abuja.

The officers died in the Beechcraft King Air B350i that crashed at Bassa village , a short distance from the Nnamdi Azikiwe International Airport, Abuja, while on a reconnaissance mission to Niger State.

It was reported that the NAF plane crashed due to engine failure.

Present at the funeral service are: the Minister of Defence, Maj. Gen. Bashir Salihi Magashi (retd.), the Chief of Defence Staff, Maj. Gen Lucky Irabor, the Chief of Army Staff, Ibrahim Atahiru, the Chief of Air Staff, Air Vice Marshal Isiaka Amao and the family members of the deceased.

The coffins draped in the Nigerian flags have already been placed on the open graves. Sitting on each coffin were the shoes and caps of the deceased.