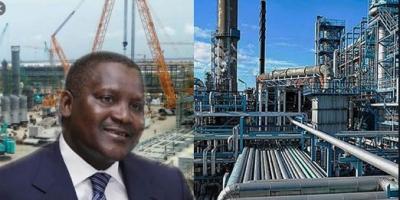 The National Assembly has lauded the ongoing oil refinery project being built by Dangote Group, saying that the operation of the refinery will strengthen the country’s currency and save it from economic doom.

The law makers on Tuesday said this during an inspection visit to the site of the Dangote refinery, petrochemicals complex, fertiliser plant and subsea gas pupeline projects in Ibeju Lekki, Lagos.

The Chairman of the Senate Committee on Petroleum Industry Bill (PIB), Mr Sabo Nakuda, stated that “With the new PIB coming up, we intend to visit all the other refineries, not only Dangote refinery.

“We were in Kaduna yesterday (Monday). We are going to Port Harcourt and Warri so that we know what the industry entails and what needs to be done to be captured in the bill so that there will be ease of operations.”

He further said “I’m totally overwhelmed. And looking at this investment here, it is unbelievable that a single individual can confront this kind of project at this time of our economic life.”

Nakuda disclosed that the Dangote’s refinery will not only provide jobs for Nigerians but will also help to strengthen Nigeria currency.

“I am sure that by the time this refinery comes on stream, even the local currency is going to be strengthened because we spend millions of dollars importing finished petroleum products,” he said.

He added that the National Assembly would give the project the necessary support, noting that “If you don’t help this industry, this refinery to come on stream, then, it means the Nigerian economy is going to be doomed.”

On the PIB, he said the lawmakers were working assiduously to ensure its passage within the next two months.

Also, the Chairman, Adhoc Committee on PIB, House of Representatives, Mr Mohammed Monguno, commended the Dangote Group for the project, saying it would help to diversify the economy and boost foreign exchange reserves.

Mr Monguno siad “The passage of the PIB will make sure that the enabling environment is created by way of legislation for such private investments to thrive, and make the oil and gas industry much more competitive to also attract further investments into the country.”

The Executive Director, Strategy, Capital Projects and Portfolio Development, Dangote Group, Mr Devakumar Edwin, said the 650,000-barrels-per-day refinery could meet 100 per cent of the Nigerian requirement of all liquid petroleum products and would have surplus for export.