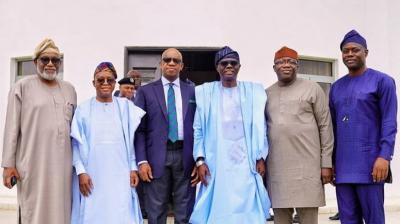 The South West Governors Forum has said the operations of the governors in the region are not targeted at any ethnic nationality or business, against criminality.

The chairman of the forum also the Governor of Ondo State, Rotimi Akeredolu, disclosed this during his second term inauguration lecture held in Akure.

He vowed that the South West Governors would fight criminality with every legal means in the region.

Akeredolu stated that “What we have set out to do in the South Western States is not targeted at any ethnic nationality or business.

“But we are against criminality and we shall fight criminality with every legal means. It is in the interest of our collective wellbeing. All we require is the support and understanding of all Federating Units, including the Federal Government.

“The simple truth is that we have lived in self-denial amid an excruciating pain that is almost cancerous now.

“Notwithstanding our challenges today, my firm belief in the Nigerian Project is strengthened by my own fact of a true Nigerian.

“That I desire a more United Nigeria with every ingredient of freedom, rule of law, patriotism, love, mutual respect and harmony is an understatement.

Akeredolu said that “I am prepared to fight for it legitimately for the benefit of all.

“Today, the most potent threat to national belief is insecurity. ”

And because we have allowed a sustained, non-beneficial stagnation for too long in our approach, the consequences are increasingly becoming more daring.

“The time to act is now, not tomorrow. As leaders, the choices we make create the path to our desires. “We cannot pretend that all is well when indeed, more things are going wrong.

“Today, rather than our Nation, Nigerians are more inclined to ethnic nationalism.

“We have resorted to clannish satisfaction in place of nation-building.

“We are gradually and unconsciously replacing national patriotism with sectional activism.

“No one, I repeat, no one should be blamed. Our very faulty and twisted federalism is responsible. “Regrettably, even those with palpable national passion and patriotism are today, gradually tilting to the unintended ethnic nationality cabin.

Akeredolu added that “Most Nigerians are losing faith in our “Unity in Diversity” sloganeering, but there is an opportunity to restore national consciousness through true federalism. “It hurts none, it pays all,” he said.

Food items will not be transported to southwest until Fulanis are safe – Miyetti Allah...
Read More...

Northern elders dissociate themselves from Gumi over allegations made against Nigerian military...
Read More...