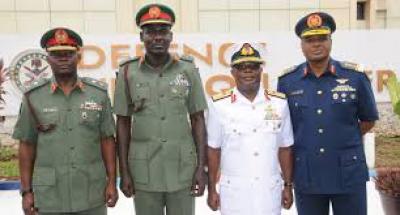 The Senate has finally confirmed the appointment of the nation’s immediate former Service Chiefs as non-career ambassadors designate.

The confirmation was done during Tuesday plenary of the upper chamber.

President Muhammadu Buhari had on February 4, asked the Senate to confirm the former Service Chiefs as non-career ambassadors.

Their confirmation was made today following the consideration of the report of the Senate Committee on Foreign Affairs, chaired by Senator Adamu Bulkachuwa (APC, Bauchi).

Earlier, the Minority Leader, Senator Enyinnaya Abaribe, attempted to draw the attention of his colleagues to a petition against their confirmation but was stopped by the Senate President, Ahmad Lawan.