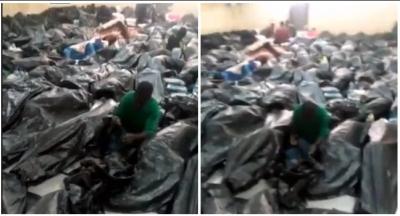 No fewer than 600 Nigerian irregular migrants in Saudi Arabia will be evacuated on January 28 and 29 in batches of 400 and 200.

The Chairman, Nigerians in the Diaspora Commission, Abike Dabiri-Erewa, said their evacuation was delayed due to issues relating to COVID-19.

It was gathered that the stranded citizens were being kept at a detention facility by the Saudi authorities pending their repatriation.

A video on social media had shown the Nigerians lamenting the hardship they were facing at the detention facility.

The immigrants wrapped in black polythene bags were lying on the floor in a packed room.

A voice in the video said, “We are here more than three months, six months, seven months ago, without any action, no better information on transport to Nigeria.

“According to the rules and regulations of this location, we are not supposed to be here for more than two weeks.

“Most nationals of other countries have been flown back to their countries. Only we Nigerians don’t have any source or way of getting back.”

But Dabiri-Erewa in a tweet on Friday said the stranded citizens would soon be evacuated back home.

She stated, “Nigerian irregular migrants in Saudi Arabia are due to be evacuated on the 28 and 29th of January, pending any unforeseen issues. Their evacuation was delayed due to issues relating to COVID-19. We appeal to Nigerians to resist traveling abroad without proper documents.”

Nigerians react over another trending video of LAUTECH lecturer caught having sex with student...
Read More...