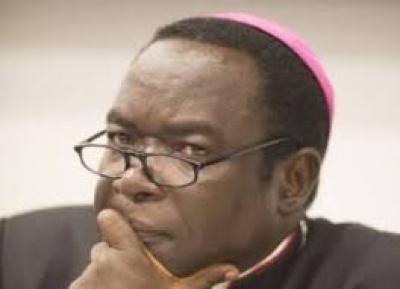 The Southern Kaduna people under the auspices of the Southern Kaduna Peoples Union (SOKAPU) have defended Bishop Matthew Kukah, and called for the arrest of those threatening the cleric with an eviction letter over his Christmas’ message.

SOKAPU’s National President also former House of Representatives member, Jonathan Asake,  on behalf of the group members, kicked against the threats to the Catholic Bishop at a world press conference in Kaduna on Monday, warning that nobody has the monopoly of violence and that no harm must befall the Catholic Bishop.

He stated that “It appears to us, therefore, that comments by Nigerians attract different reactions from the government, depending on the region, ethnicity, and religion of the person making such comments.

“It’s sad to note that when persons of core Northern extraction criticize the government; they are taken as kind words, but when the same statements are made by people of Southern or Middle Belt extractions; they are harassed and tormented and their comments branded as treasonable by the government.

“This discriminatory posture of government clearly shows that the Buhari-led administration treats Nigerian citizens differently; some as first-class and others considered as second class.

“When the respected Bishop Kukah criticised the government in his Christmas homily, all hell broke loose from Northern elements who have consistently exhibited intolerance since the assumption of Buhari as the President.

“Sadly so, his glaring nepotism, chauvinism, and bigotry in his governance style seem to lend credence to this perception.”

Asake added that, “All that Bishop Kukah is accused of saying against this government had been said by some other people in a more critical manner but never attracted a barrage of condemnation and threats.

“We note that the Sultan of Sokoto, prominent emirs, and the Northern Elders’ Forum (NEF) had condemned President Buhari over his dismal performance in tackling insecurity in the country, with NEF calling on him to resign.

“The anger and threats that are being issued against the revered Bishop were never served on the Sultan, emirs, and the NEF which clearly shows the discriminatory posture of this government.

“SOKAPU stands with Bishop Kukah and others who before him had called to attention the subtle and continuing annihilation of our communities.

“Those who have threatened Bishop Kukah ought to be arrested and be made to face the full wrath of the law.

“For the Islamic group that issued out a threat and an ultimatum on the Bishop, we must warn here that nobody has a monopoly of violence and nothing should happen to Bishop Kukah.”

SOKAPU head lamented on the worsening insecurity in the southern part of Kaduna, noting that 80% of residents of Chikun LG could no longer go back to their ancestral land.

he said between January and December 2020, victims of kidnappings in Southern Kaduna had paid N900million as ransom to their abductors.

You are not Powerful than my Govt, Buhari warns bandits...
Read More...

Northern elders dissociate themselves from Gumi over allegations made against Nigerian military...
Read More...