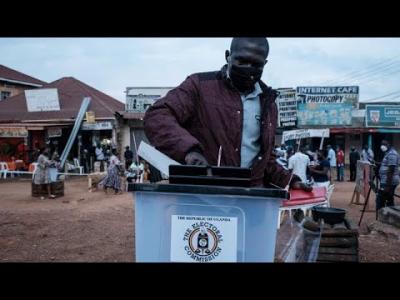 There were long queues in Kampala Thursday morning where Ugandans began to cast their ballots in the presidential and parliamentary elections, as they contended with a half-hour delay at polling stations.

A heavy military and police presence was also around the capital city as well as a continued internet blackout which began the evening before.

All this amid a tense political climate as President Yoweri Museveni, in power since 1986 after helping oust Idi Amin, seeks a contested 6th term in office.

Although singer turned politician Bobi Wine, 38, the strongest out of the 10 opposition candidates, seems to have the unofficial popular vote amongst the youth.

With 18 million Ugandans registered to vote across the country’s 35,000 polling stations, time will reveal the outcome of this election already marred by a violent crackdown on Museveni's rivals and government critics.

The United Nations, in addition to global rights and democracy groups have raised concerns about the integrity and transparency of the election.

Only one foreign organisation, the African Union (AU), has sent monitors to observe the election, along with an AU women's group.

Headlines (Uganda):
Read our other news items below...