Nigeria   ::   News
NLC, TUC walk out of meeting with FG over fuel price hike, insists on reverting to old
Nov 23, 2020
By: Cletus Ilobanafor 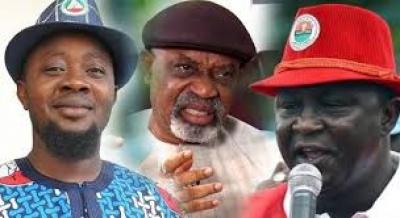 The Nigeria Labour Congress (NLC) and the Trade Union Congress (TUC) , on Sunday, walked out of a meeting with the federal government over the recent hike in the pump price of premium motor spirit (PMS), otherwise known as fuel.

Following the increase, the product now sells between N165 and N170 per litre.

The meeting, which took place at Presidential Villa, Abuja was a follow-up discussion on the resolutions reached at previous meetings on the increase in the price of fuel and electricity tariff.

Addressing the meeting, President of the Trade Union Congress (TUC) Quadiri Olaleye described government’s action as a slap on the face of labour and an attempt to blackmail them in the minds of the public as compromised fellows.

Representatives of the Nigeria Labour Congress (NLC), also spoke in similar tone, accusing the federal government of reneging on its understanding with labour team.

Efforts by the government team led by the Secretary to the Government of the Federation, SGF, Boss Mustapha and the Minister of Labour and Employment, Senator Chris Ngige to persuade the labour leaders to listen to their presentation failed on deaf ears.

To worsen the situation, the Minister of Labour had told the labour team that he was in charge and that no one should decide for him how to handle the meeting

The meeting, which began around 8pm, ended less than 15 minutes later as the labour leaders accused the government of not being sincere with the people.

Comr. Olaleye, while speaking with newsmen said that the government was not sincere with the labour in the discussion. He said that the labour leaders cannot walk freely on the roads because workers accused them that they had betrayed their trust. He said, “Gentlemen of the press, like I mentioned at the beginning of the meeting that today’s meeting is not going to be as usual while because we have seen the insincerity of government and it is putting us at risk.

“They are taking us for a ride which cannot continue. We are on the process of discussion for over three months now and they made an announcement increasing the fuel price again and no other person than the NNPC.

“When has the authority been given to NNPC to increase the price of pms, this is unacceptable, the meeting agenda is not well prioritized and because of that we are leaving the meeting, we cant continue, we will go back to our organ and we are going to get back to you on the next action. We can’t continue with their insincerity.”

The Minister of Labour and Employment, Senator Ngige who played down on the situation said that the labour leaders wanted to go and discuss with their organs.

The Minister however said that the Union leaders will be invited again for further discussion in the next 24 hours.

“Love it or leave it, no herdsman can operate without permission” Ondo insists...
Read More...