Nigeria   ::   News
“Terrorism will soon become a thing of the past in Nigeria” says Pompeo
Nov 12, 2020
By: Abara Bleesing Oluchi 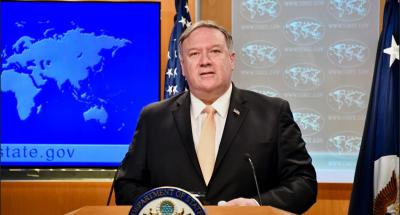 US secretary of state, Mike Pompeo, says his country will use everything at its disposal to counter terrorism in Nigeria and other parts of the world.

Pompeo, after a virtual meeting on Tuesday disclosed that progress is being made in the fight against terrorism.

The meeting was attended by the US, Nigeria, members of the Global Coalition to Defeat Islamic State of Iraq and Syria (ISIS), and representatives of West African states.

Popmeo on his Twitter on Wednesday, thanked Nigeria for co-hosting the meeting.

“Great progress was made at yesterday’s virtual Global @Coalition to Defeat ISIS meeting on West Africa. We will use all tools at our disposal to counter ISIS and its affiliates anywhere in the world. My thanks to Nigeria for co-hosting the event,” he wrote.

The newly designated special envoy for the Global Coalition, Nathan Sales, had at the meeting outlined the Coalition’s increasing focus on defeating ISIS’ global branches and affiliates.

He also expressed his appreciation to the Nigerian delegation that was led by Yaminu Musa, who serves as coordinator for the counter terrorism centre in Nigeria’s office of the national security adviser (ONSA), for co-hosting the event.

Pompeo’s office in a statement had earlier said as the Global Coalition seeks to apply lessons learned from the fight against ISIS in Iraq and Syria to other locations, participants reviewed potential lines of effort, including the use of battlefield evidence and border security measures that could be applied in West Africa.

ISWAP has continue to wreak havoc in the north-eastern region of the country.

Nothing must happen to Bishop Kukah – CAN warns, calls on security agencies...
Read More...