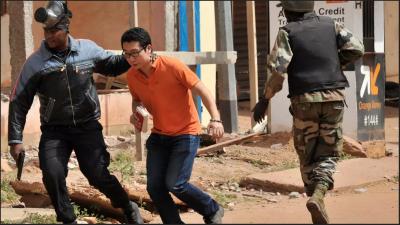 Bamako-Two men were found guilty and sentenced to death on Wednesday by a Malian court for killing more than two dozen people in attacks targeting foreigners in 2015.

The duo, Fawaz Ould Ahmed and his co-defendant Sadou Chaka were convicted after two days of hearings.

“The court finds you guilty of the facts you are accused of and does not grant you any mitigating circumstances,” said the head of the Bamako Criminal Court, Souley Maiga.

Ould Ahmed confessed to attacking a club in the capital Bamako in 2015, killing five people, in revenge for cartoons of the Prophet Muhammad published by France’s Charlie Hebdo magazine.

“We are the ones who carried it out: Al-Mourabitoune,” said Ould Ahmed, who is also known as “Ibrahim 10”, referring to a prominent armed group in the Sahel.

Ould Ahmed and two other men, Malian nationals Sadou Chaka and Abdoulbaki Abdramane Maiga, were charged both for the La Terrasse club attack and for another assault in November 2015, when gunmen took guests and staff hostage at the luxurious Radisson Blu hotel.

Ould Ahmed told the presiding judge that he felt no remorse for the deadly violence.

The trial was a rare event in Mali, where years of conflict and political instability has weakend criminal justice systems and institutions.

Ould Ahmed was arrested by police in 2016 in Bamako while planning other attacks.

Mali is currently caught in the middle of a militant insurgency in its central and northern regions which has killed and displaced thousands.

Headlines (Mali):
Read our other news items below...

Group appeals to set aside judgement of High court in case of FG nomnation of 21 of 33 nominees...
Read More...