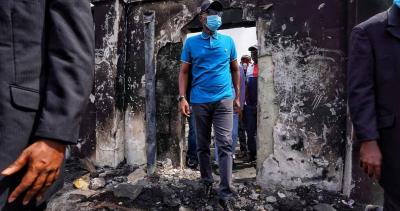 Angry Nigerians on Twitter have expressed dissatisfaction over the oath of secrecy administered on members of the Judicial Panel of Inquiry set up by Lagos State Governor, Babajide Sanwo-Olu.

The oath of secrecy administered on panel members reads in part, “I solemnly swear/affirm that I will not directly or indirectly communicate or reveal any matter to any person which shall be brought under my consideration or shall come to my knowledge in the discharge of my official duties, except as may be required for the discharge of my official duties or as may be officially permitted by the governor. So help me God/Allah.”

CEOAFRICA had earlier reported that the Lagos State Governor, Babajide Sanwo-Olu has set up names of a Judicial Panel of Inquiry and Restitution for Victims of SARS Related Abuses & Lekki shooting.

The panel, is to investigate the shooting of unarmed protesters at the Lekki toll plaza on October 20, 2020 and expected to begin sitting today.

The panel is also to probe alleged extrajudicial killings perpetrated by operatives of the now-disbanded Special Anti-Robbery Squad of the police.

“These panels are a public inquiry into a matter of public interest about public crimes and atrocities committed by the police. Televise all panel sessions,” he wrote.

Another influencer, Dr. Dipo Awojide, said the state government should try to build trust among the youths and the oath of secrecy could undermine this.

“There is absolutely no need for folks joining the panel in Lagos State to swear an oath of secrecy. It just makes everything look suspect from the get-go. Trust level is currently at the lowest level. Lagos State Government should do everything to build trust,” Awojide tweeted.

Adetutu Balogun also questioned the rationale behind the oath of secrecy, saying, “Why are independent judicial panel members swearing an oath of secrecy to Babajide Sanwo-Olu for a public hearing?”

A lawyer, Festus Ogun, said on Twitter that the reference to the governor in the oath was also worrisome.

Ogun said the oath of secrecy was defective and at variance with Section 38(4) of the 1999 Constitution.

“Again, this oath of secrecy is legally defective. First, the idea of secrecy is occult. Section 38(4) of the 1999 Constitution frowns at ‘secret societies’.

“Oath of confidentiality would be better. Second, oaths are to be sworn before a commissioner of oaths, not the governor,” the lawyer maintained.