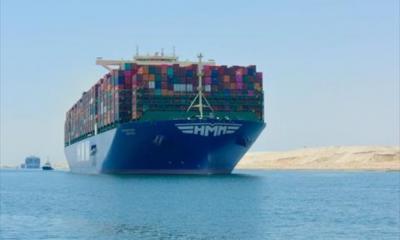 The ship was built earlier this year and is sailing under the flag of Panama.

According to Marine Traffic, the ship’s carrying capacity is 19,529 twenty-foot equivalent units (TEU) with a reported current draught of 14.8 meters, a length overall (LOA) of 400 meters and a width of 62 meters.

This is the first sea voyage for the ship within the southern convoy of ships of the new shipping course of the canal, coming from Saudi Arabia and heading to The Netherlands, Rabie said.

Rabie ordered providing all necessary services and navigation support to the ship. He also tasked a group of senior guides to ensure the safe passage of the ship.

In May this year, the world’s largest container ship “HMM Algeciras” passed through the New Suez Canal as part of the convoy of the south. The vessel belongs to the Korean container line HMM. It carries a tonnage of 24,00 0TEUs, with a length of 400 meters and a width of 61 meters.

The vessel made its first cruise through the Suez Canal during its trip from Yantian Port in China to Rotterdam in The Netherlands.

The New Suez Canal was inaugurated in 2015. It is a waterway that is parallel to the famous Suez Canal, with the aim of facilitating traffic in both directions and minimizing the waiting time for transiting ships.

The main goal of the Suez Canal, both the original and the new one, is to link the Red Sea in eastern Egypt, through Suez city on the Gulf of Suez, with the Mediterranean Sea in the northern part of the country, through Port Said city, passing by Ismailia city almost halfway.

Headlines (Egypt):
Read our other news items below...