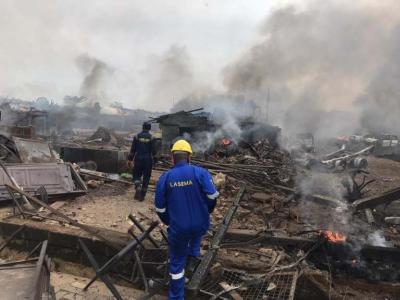 Prior to the afternoon gas explosion incidence in lagos today when a good number of persons sustained injuries and several vehicles burnt caused by a gas laden truck at Cele Bus stop, Iju Ishaga, the Director-General of Lagos State Emergency Management Agency, LASEMA, Dr. Femi Oke-Osayintolu has spoken on the incident.

According to Oke-Osayintolu, “The impact of the explosion led to fire at adjoining buildings and several vehicles were burnt.

“Several persons were also injured and have been taken to the nearest hospital for treatment.

“The inferno is being tackled head-on by the combined efforts of the LASEMA Response Team led by the Director Operations, Lagos Response Unit, LRU Fire, LASG Fire Service, Nigeria Police Force and NSCDC.”

He however said that the situation has been brought under control at press time, 4.50pm.

An eyewitness said the truck with an unknown registration number while conveying gasoline had a lone accident and exploded in the process.