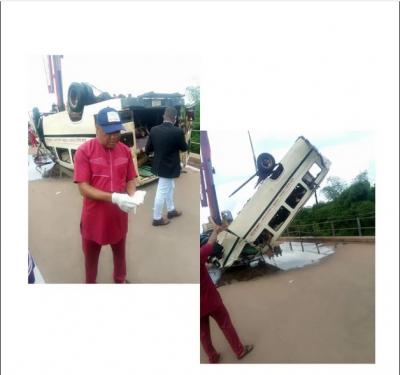 Three more corpses were, on Sunday, recovered from the river that a bus conveying 32 passengers, who were returning from a burial, plunged into on Friday.

CEOAFRICA had earlier reported that the victims were returning from a funeral in the Afikpo South Local Government Area of the state to Enugu State, when the incident happened.

One of the three corpses recovered was identified as a retired police officer, CPS Livinus Mbah.

The Police Public Relations Officer in the state, Mrs Loveth Odah, told our correspondent, “Three more corpses have been recovered. Among them is the lifeless body of CSP Livinus Mbah (retd.), making a total of 23 victims.

“The corpses have been deposited at the Mater Misercordae Hospital, Afikpo, for preservation. Effort is on to recover the remaining 10 persons.”

Investigations revealed that 19 out of the 23 persons were brought out dead, while four were hospitalised and responding to treatment.

Submerged communities in Rivers cry out to the Govt...
Read More...