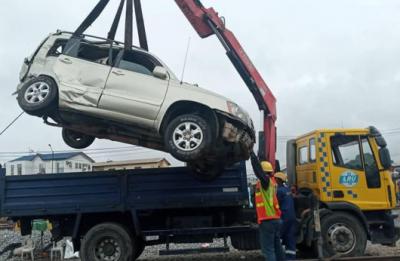 An accident involving a moving train and two vehicles crossing the railway has occurred at Arena plaza, Oshodi, Lagos.

The Lagos state Command Police Public Relations Officer, SP Muyiwa Adejobi (mnipr) in a release today made available to CEOAFRICA disclosed that the accident occurred at about 7:45am today.

Three people who were reported to have sustained injuries of varying degrees have been taken to undisclosed hospital for treatment.

The accidents vehicles were however towed from the rail track for ease of passage of other trains and avoidance of further disaster.

It was gathered that the incident has been referred to the Railway Police command for further investigation and necessary action.