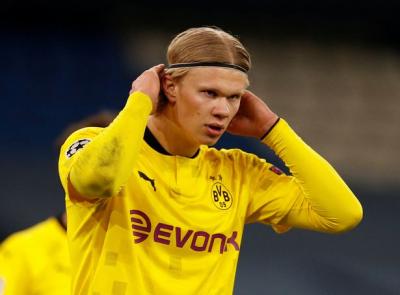 The Mirror says Raiola holds grand plans of brokering an eye-watering amount for his client through a sensational overall package.

With a huge basic salary in store, image rights, digital opportunities and commercial deals have all been earmarked in the report as ways of reaching the target.

Raiola’s demands are said to likely rule out the majority of clubs embroiled in the dogfight to sign Haaland except for a handful with enviable finances.

Manchester City, Real Madrid and PSG have all been identified as the only suitors who would be able to stump up the cash.

Real Madrid and Barcelona, which held talks with Raiola and Haaland’s father a fortnight ago, have been left ‘shocked’ after being told about his proposal for one of the world’s finest young talents.

City, as well as Premier League rivals Chelsea, Liverpool and Manchester United, are also believed to be in the chase to secure Haaland’s signature.