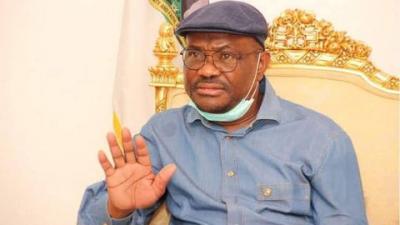 Nigeria – Saturday,10 April 2021: Rivers State Governor Nyesom Wike has placed a ban on the planned meeting of some Igbo residents in the Oyigbo Local Government Area of the state.

The decision taken by the governor is due fears that such meetings could spark fresh unrest in the LGA.

It was gathered that a group known as United Igbo Community was scheduled to hold a meeting at Oyigbo on Saturday, April 10, 2021.

But the State Government in a statement signed by the Commissioner for information and communications, Paulinus Nsirim, directed security agencies “to ensure that the said meeting does not hold to forestall a breakdown of law and order in the area.”

Oyigbo LGA is considered a stronghold of the Indigenous People of Biafra (IPOB).

The LGA recently witnessed a major crisis involving the military and members of the IPOB which led to a military operation in which soldiers and civilians were killed.

Aside from that, the meeting of the Igbo community is coming up at a time when the nation is grappling with attacks on police and government facilities.

The police headquarters in Owerri and the state prison were recently attacked and over 1000 prisoners freed.