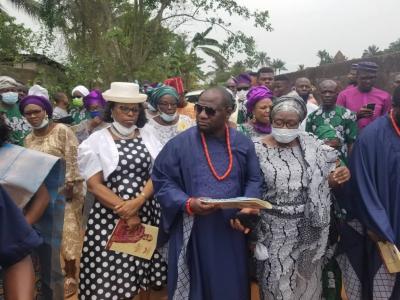 Gbenga Ariba, who was a lecturer and a pioneer staff of the Department of Mass Communication, Chrisland University, died on the 10th of March 2020 at the age of 67.

He was laid to rest today, Friday, 9th April, 2021 at the Emmanuel Anglican Church cemetery, Isonyin-Ijebu, amidst wails and tears from members of the family, friends and well wishers.

During his sermon at the Emmanuel Anglican Church, Isonyi-Ijebu, Ven. Femi Osikomaya described Gbenga Ariba as a deligent man who had made indelible impacts in broadcasting and advertising.

He urged the congregation at the funeral service to put God first in every thing they do and ensure they live an impactful live.

Prof. Babalola had described the sudden demise of the ace broadcaster as “rude shock and painful loss.”

She noted that Ariba was a gentleman par excellence who worked assiduously and served in various capacities in Chrisland University.

The VC prayed that God will comfort the wife, children and other family members of the deceased.

“May God never forsake the family,” she prayed.

Gbenga Ariba was a veteran broadcaster, advertising practitioner and a scriptwriter.

During his lifetime, he wrote over 20 plays and over 10 satirical and pungent drama series for both television and radio programmes.

As at the time of his departure, he was rounding off his PhD. Thesis at the University of Ibadan.

The ace broadcaster joined Radio Nigeria, Lagos in 1978 where he served as a producer, senior producer and principal producer for series of programmes.

He rose to the position of station manager before he left for advertising.

He worked with Lintas Advertising Firm from 1990 to 1995 as a Senior Manager.