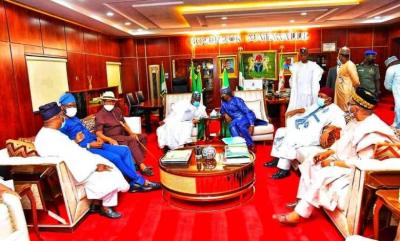 Six Governors of the People Democratic Party (PDP) have implored Zamfara State Governor, Bello Muhammad Matawalle, not to dump the party for the All Progressives Congress (APC).

The PDP governors advised Matawalle not to be intimidated by gimmicks of the APC and discouraged about the security challenges in the state.

The governors, which are: Seyi Makinde of Oyo, Nyesom Wike of Rivers, Bala Mohammed of Bauchi, Darius Ishaku of Taraba, Umar Fintiri of Adamawa and Aminu Tambuwal of Sokoto, were in Government House Gusau on Wednesday, where they spent several hours with Matawalle who was alleged to have concluded arrangements to defect to the APC.

Wike expressed surprise about why members of the APC members wanted Matawalle to join their party after intimidating him on several occasions.

“I can’t understand why a party which declared Zamfara a no-fly zone is coming to woo the governor,” he said.

He advised Matawalle not to lose sleep because of insecurity, adding that the situation has been in existence even before the governor took over the affairs of the state.

“The insecurity problem started before you became the governor, so, nobody can come and use insecurity to intimidate you,” Wike added.

He described the N50m donated by the APC to the victims of the fire incident as a Greek gift, urging Matawalle not to receive the opposition again.

Matawalle expressed happiness with the visit by the PDP governors which he also described as timely following the Gusau market incident.

He said he was almost abandoned by the PDP governors, lamenting that, “a crying child abandoned by his mother is likely to take food from a street beggar.”

Matawalle noted how close he was to Governor Aminu Tambuwal with whom he has a long history dating back to their times at the House of Representatives.

Obasanjo : Nigeria’ll slide into dissolution if we don’t get it right 2023...
Read More...