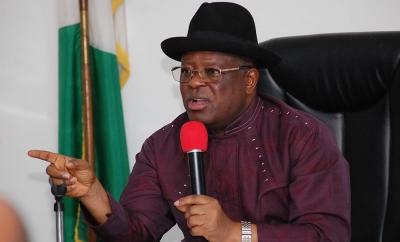 Governor Dave Umahi of Ebonyi state has condemned the killing of no fewer than 15 persons in Egedegede community in the Ishielu Local Government Area of the state by suspected herdsmen.

CEOAFRICA had earlier reported that many people have been killed following an attack launched by suspected Fulani herdsmen in four villages in Ebonyi State. The affected villages are Umuhuali, Nkalaha, Obeagu, Nkalagu, and Amazu in Ishielu Local Government Area of the southeast state. Read here.

While visiting the affected communities today March 31, Governor Umahi, said despite protecting Fulani herdsmen in the state and South-East region, the herders went ahead to kill his people. Governor Umahi said he knows the sponsors of the killer herdsmen but would not disclose their identities yet.

Speaking to newsmen, he said

“We are in Ishielu where the AK-47 herdsmen came on Monday and killed 15 of the members of this community. I remember a year ago that we had an incident of the killing of two herdsmen within this same location. And immediately, the security agencies and local government chairman and community leaders all came together to condemn the attack and killing and we immediately asked the security agencies to fish out the people who did.

We fished them out and as we talk, they are standing trial in Ebonyi State. The community, government and security agencies appeased the herdsmen and made peace with them. And so, it is very shocking that overnight, all the herdsmen in Ishielu LGA vacated which means that the local herdsmen are part of the conspiracy of the killing of our people.

They vacated despite all the efforts that my government and the governors of the South-East and security agencies have been making to give them full protection, not only in Ebonyi State but also in the South-East. We feel so sad, so worried for our country Nigeria and we are short of words.

We have traces of the sponsors and the sponsors of those who came here. I will not disclose them” governor Umahi said.

Peter Obi cries out, says ‘Prominent Nigerians have been plotting to blackmail and link me to spon...
Read More...