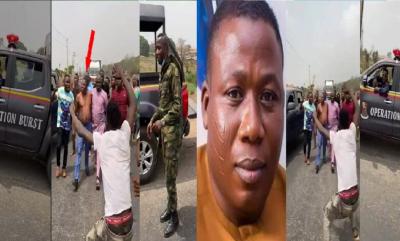 The Department of Security Services (DSS) has denied being involved in the alleged attempt to arrest Yoruba activist, Sunday Adeyemo, popularly known as Sunday Igboho, on Friday along the Lagos-Ibadan highway.

A video had surfaced on social media platforms yesterday showing a confrontation between Igboho’s supporters and some security officials and it was widely reported that a combined team of the Police, and the DSS had trailed the convoy of the activist on his way to Lagos in a bid to arrest him.

It was disclosed that Igboho was on his way to Lagos to meet with National Leader of the Yoruba socio-cultural group, Afenifere, Chief Ayo Adebanjo.

In a statement by the spokesman of the service, Dr. Peter Afunanya, the DSS has reacted to the allegations and said its operatives were not involved in the alleged attempt to arrest Igboho.

“The Department of State Services wishes to refute the news that it attempted to arrest one Sunday Igboho, today, at Ibadan, Oyo State.

“The said news is misinforming and should be taken as fake and therefore be disregarded. This is not true.

“The DSS did not arrest him. It did not attempt to too. Disregard such misinformation,” Afunanya stated.

Nigeria Government hits back at Bishop Kukah for his Easter Sunday message ,says your criticism of B...
Read More...