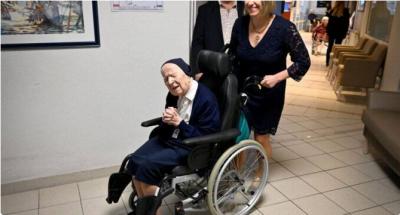 A 116-year-old French nun, identified as Andre, said to be the oldest living person in Europe, has survived COVID-19.

Andre who was born Lucile Randon on February 11, 1904 tested positive for coronavirus in her retirement home in southern France, on January 16.

It was learnt that Andre recovered from the disease 25 days later, a day before her 117th birthday.

Older people and persons with underlying ailments are more liable to dying from the coronavirus infection.

The nun, who said she was asymptomatic, isolated from other residents when her result came back positive.

David Tavella, spokesman for the Sainte Catherine Labouré retirement home, said Andre was not scared but concerned about the safety of others.

“She has been very lucky. She didn’t ask me about her health, but about her habits. For example, she wanted to know if meal or bedtime schedules would change. She showed no fear of the disease. On the other hand, she was very concerned about the other residents,” he told Var Matin newspaper.

Chioma and Davido Relationship: “Woman pray God should not give her children that don't have sense...
Read More...