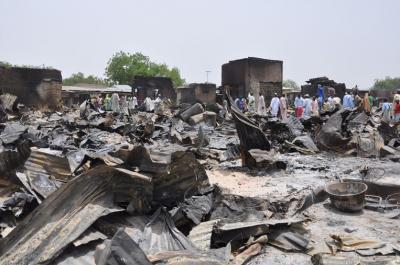 A group known as Coalition of Northern Elders for Peace and Development (CNEPD) has lamented on the increasing rate of insecurity in the Northern parts of the country that are under the attack of Boko Haram, bandits and kidnappers.

A statement issued on Tuesday in Abuja by the National Coordinator of CNEPD, Zana Goni, stated that the insecurity situation in the Northern region has not in any way got better, adding that the criminal activities of Boko Haram, Bandits and Kidnappers have put to halt the educational, economic and socio-political activities in the region.

He said, “We confirm that the entire North is still under siege from Boko Haram terrorism, banditry, kidnapping and other forms of criminality. This ugly security situation, we noticed, has been underreported. We are concerned over this poor media coverage.

“The inability of the service chiefs to change the game against terrorists, bandits and kidnappers threatening the continued existence of the region despite the heavy investment made by Federal Government so far to ensure restoration of peace, is no doubt worrisome to us. We believe wholeheartedly too, that this development is a source of great concern to all patriotic Nigerians out there.”

He added that “As we write this to present our plight to the public, there is no school opened to academic activities in the region, except perhaps in Maiduguri metropolis of Borno State. Farmers can’t go to farms anymore, especially in the North East, fuelling our concerns of severe famine if the situation is not immediately addressed.

“Also, buying and selling, besides other economic activities, have been brought to a total halt by activities of terrorists, bandits and kidnappers. There is equally no social activities anymore in the region as people preferably stay in their various houses now to avert being prowled on by the adversaries.”

“We remind Mr. President that for you to be successful and an accomplished president, your party should succeed you when you take a bow.

“Nigerians should be happy to vote for your party, but your continued refusal to listen to Nigerians on the restructuring of the security architecture is rapidly threatening the chances of APC in 2023. Urgent steps need to be taken to restore public confidence in the party.

“We in the North are the backbone of your party and if nothing is done soonest to address the issue of insecurity in our land, we will have no choice than to begin to mobilise against APC come 2023.”

It was stressed that drug abuse is one of the major factors contributing to insecurity in the North.

CNEPD, therefore, implored the new NDLEA chairman to be more decisive with drugs peddlers in order to end the menace of these criminal activities that could be caused by drug abused in the Northern region and other parts of the country.