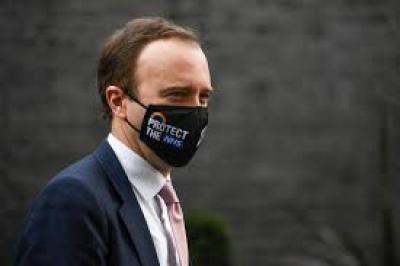 The U.K Health Secretary, Matt Hancock, said he has gone into self isolation after being contacted by the NHS track and trace app on Monday evening.

He announced his self-isolation in a video post on twitter, saying “Last night I was alerted by the @NHSCOVID19app to self isolate, so I’ll be staying at home & not leaving at all until Sunday. “

Hancock, who’s been leading the UK’s response to the coronavirus pandemic and overseeing the rollout of the vaccine, has been forced to isolate after coming into close contact with someone who has since tested positive for COVID-19.

It was disclosed that the health secretary did not give any indication that he was feeling unwell or believed he had symptoms, he only explained that he will be working from home for the next six days.

Hancock used his announcement about the situation to urge others who might find themselves in similar situations to play their part in helping to keep the virus under control by following the guidelines around potential transmission, stating that this is “how we break the chains of transmission”.

This self-isolation is perhaps the most important part of all the social distancing.

As he was contacted via the track and trace app, it is not currently clear who, when or where he came into contact with the person who tested positive or whether any of his colleagues in the UK parliament could have been affected.