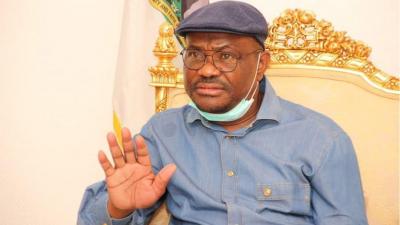 Rivers State Governor, Nyesom Wike, has said service chiefs that are short of ideas on how to tackle insecurity in the country should resign in order to give room for others with fresh ideas.

The Governor made this known on Friday at the wreath-laying and parade ceremony to mark the 2021 Armed Forces Remembrance Day in Port Harcourt.

He said “A country is as strong as its Armed Forces. Her inability to defeat the Boko Haram insurgency despite years of full military engagement shows that all is not well with our approaches and commitments to the battle against internal insecurity.

“Today, therefore, also raises the need for all of us to be worried by the deteriorating security situation across the country and restate the call on the Federal Government to do everything necessary to bring the security threat by Boko Haram and armed bandits to a decisive end in the shortest time possible.”

The Governor, while commending the efforts of the security chiefs in getting rid of insurgency in the country, also urged them not to relent in their continued efforts until Boko Haram and killer bandits are comprehensively defeated and smoked out of existence.

He said “We thank the Service Chiefs for their efforts so far in the battle against the insurgents. But we also align with the concern of citizens that having seemingly reached their wits’ end, they should now give way for fresh hands and ideas to give the fight the impetus that it so strongly needs to ensure that Boko Haram and killer bandits are comprehensively defeated and smoked out of existence.

“The time has come for the Federal Government to stop the pretence, change strategy, seek help from our friends and confront the urgency of the internal insecurity situation in Nigeria with every weaponry at its disposal to stop the killing, free all hostages and improve the physical security of our country for all Nigerians.”

The Governor acknowledged that Nigerian must continue to remember, honour and celebrate the soldiers, veterans, and their families for their extraordinary courage in service and sacrifice to the country.

“They are fighting to keep us safe and secured in the face of insurgencies from Boko Haram, Bandits and other criminal elements threatening our peace and security across the country,” he said.

Insecurity: Akeredolu demands every state be allowed to secure its space...
Read More...

“You once called for the sack of these service chiefs, why then did you approve their appointment?...
Read More...