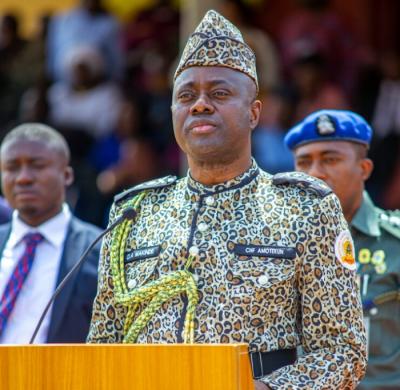 Oyo State Governor, Engr. Seyi Makinde, has attributed the rising insecurity in the state to some undocumented foreigners from Mali, and advised traditional rulers and village heads to stop allocating land to them.

In a statement by his Chief Press Secretary, Mr. Taiwo Adisa, the Governor said that his administration would ensure foreigners in the state are properly documented.

It was stated that “The governor equally warned traditional rulers and village heads against allocating lands to undocumented foreigners, stating that some undocumented individuals had been contributing to insecurity in the state.

“So, we are going to provide some documentation for them. Those who work in the mining site will be documented and a task force is being set up to do this.”

He added that okada (bike) riders would be registered for proper monitoring, but if their leaders fail to register them, their operations would be regulated.

“But if they would not register their people, we will be left with no choice than to just regulate the hours in which they operate. So, I am hopeful that they will cooperate with us by getting their people registered,” he said.

Adisa also noted that “Amotekun is not operating in a vacuum. They are a creation of the law of the state. The Nigerian Police is a creation of the Constitution of the Federal Republic of Nigeria. It is normal that we have inter and intra agency friction where possible, but we will get everybody together and seek alignment towards the same end basically.”

He said some persons were out to discredit the good works of Amotekun, but such would not be allowed to stand.

The Chief Press Secretary, however, called on any person with genuine complaints against the security outfit to come forward, adding that the state would look into such.

He said the operations of Amotekun Corps would be checked, noting that the state would not also yield to any blackmail against the new security outfit.