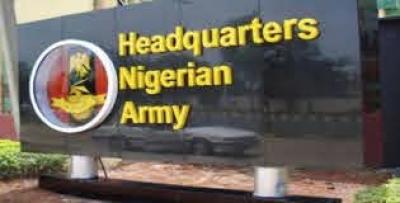 The Defence Headquarters have debunked the report by the United Nations which stated that 110 civilians were killed by Boko Haram in Saturday onslaught on farmers in the Jere Local Government Area of Borno State.

Maj. Gen. John Enenche, Coordinator, Defence Media Operations, said as of Monday morning, 43 corpses were recovered from the incident scene in the Zabarmari area of the northeast state.

The victims (farmers) who were working on rice fields were reportedly tied up by the terrorists before slitting their throats.

On Sunday, the UN Humanitarian Coordinator in Nigeria, Edward Kallon, disclosed that at least 110 persons died in the horrific attack.

But reacting on Monday morning, Enenche said the troops counted the corpses together with the locals and 43 deaths were recorded.

He spoke while featuring on Channels Television’s Sunrise Daily programme monitored by The PUNCH.

He said, “I knew it (the issue) is going to come up particularly because it is coming from the United Nations and not a source that does not want to be identified. This is a source that has identified itself that a 110 specifically (were murdered).”

Enenche, however, explained that he contacted the field commandants and “they gave me a synopsis of what happened. When the governor was to go (to the scene) and after they had recovered the dead, the troops had to move in there and they counted 43.

“Of course, some people ran into the bush and they started coming back and trickling in.

“As at 2pm yesterday (Sunday), I called them and they got back to me at about 7pm yesterday, still counting, looking if they will recover (more corpses). We call it Exploitation after Action Review.”The DHQ Coordinator said the search for more remains of victims is still on but insisted that 43 corpses were retrieved from the scene.

“Probably we may count up to the figure he (Kallon) gave in the future but as it is now, what we have counted with the locals is still 43 and we are hoping that we don’t get beyond that.

“This is the real situation. I did not sleep, we had to follow it because this is very relevant coming from the United Nations.”

The massacre of the rice farmers, who were buried yesterday, has attracted strong international and national condemnations with some Nigerians calling on the President, Major General Muhammadu Buhari (retd.), to sack the country’s service chiefs and overhaul the security architecture of Nigeria.

“Love it or leave it, no herdsman can operate without permission” Ondo insists...
Read More...