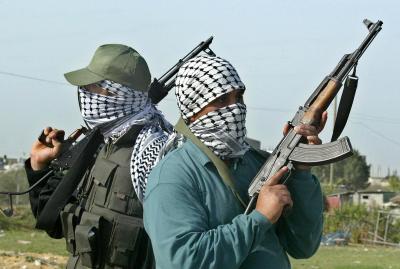 “The enemies of Afghanistan, the enemies of education… have entered Kabul University,” Tariq Arian, a spokesman for the ministry of interior, told reporters.

“The security forces are in the area trying to control the situation. They are advancing carefully to prevent any harm to the students.”

The Taliban said they were not involved, but several education centres have been attacked over the years by extremist groups such as Islamic State.

Hamid Obaidi, a spokesman for the ministry of higher education, told AFP that gunfire erupted when government officials were expected to arrive for the opening of the book event.

Arian said several people had been rescued from the university campus.

Masooma Jafari, a deputy spokeswoman for the health ministry, told AFP that eight people, including students and teachers, had been taken to hospital.

Students spoke of chaos and confusion as gunfire erupted.

“We were studying inside our classrooms when suddenly we heard a burst of gunfire inside the university,” said student Fraidoon Ahmadi, 23.

“Some university students have fled… it is chaotic and students are terrified,” he added.

Ahmadi said he and several other students were besieged for more than two hours before being rescued.

“We were very scared and we thought it could be the last day of our lives… boys and girls were shouting, praying and crying for help.”

“I have no words to express how we survived today’s attack by gunmen on our university,” he said, adding that there were about 800 students in the social sciences faculty itself where he studied.

Last week at least 24 people, mostly students, were killed in a suicide attack on an educational centre in western Kabul that was claimed by IS.

In 2018 a suicide bomber killed dozens of people, many of them teenagers, in front of Kabul University in an attack also claimed by IS.

Sixteen people were killed when militants stormed the American University of Afghanistan in Kabul in 2016.