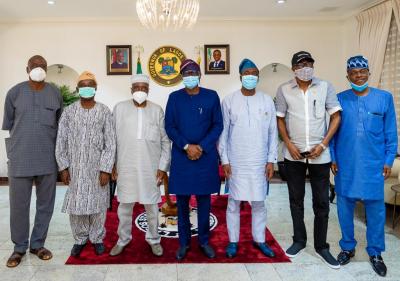 This information was made available to CEOAfrica on Friday by the Police Public Relations Officer Lagos State Command, SP Olumuyiwa Adejobi (mnipr).

According to SP Adejobi, Smith and the others inspected some of the damaged police formations for on-the-spot assessment of the formations and sympathise with the entire police workforce, the government and the people of Lagos State on the recent mayhem caused in the state by criminally-minded hoodlums, who used the EndSARS protests as an excuse to carry out their horrendous crimes.

He added that the chairman was bewildered at the degree of damages done to police formations, public as well as private facilities in Lagos State, most especially the gruesome killing of police personnel. He nevertheless called for thorough investigation into all the cases recorded during the crisis.

He further stressed that officers and men of the command should take the ugly incident as one of the challenges and hazards of police job in a developing country like ours.

Alhaji Smith advised police officers and men in Lagos to rejig their anti-crime strategies, while assuring the police family in Lagos and in other parts of the country that the high command of the Nigeria Police Force will do the needful to look after the welfare of its entire personnel, their safety and defend their fundamental human rights according to the provisions of the Constitution of the Federal Republic of Nigeria.

The retired Police Chief is said to have also visited the Governor of Lagos State, Mr Babajide Sanwo-Olu at Lagos House, Marina, Lagos, to sympathise with him, the government and good people of Lagos State.

He further appreciated the governor for his supports to the police command towards achieving effective policing of the state.