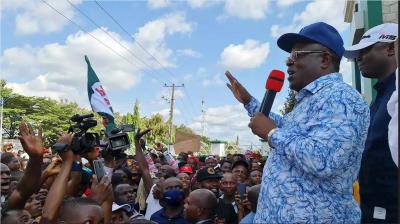 The Ebonyi State Governor, David Umahi who also doubles as the Chairman of the South-East Governors’ Forum has assured Nigerians from other ethnic groups of their safety in Igboland.

The governor gave the assurance while inspecting properties damaged by hoodlums at Okposi and Uburu communities of Ohaozara LGA of Ebonyi on Sunday in the wake of the #EndSARS protests across the country.

He said that he had spoken with leaders from all the geopolitical zones of the country and assured them of their citizens’ safety.

“They, in turn, assured us of the safety of our people in their lands, especially those living in the South-West. They urged us to ignore the threats of the crisis being circulated on social media.

“We want to assure all ethnic groups residing in the South-East to go about their business peacefully and report any threat to the governors and security agencies,” he said.

He noted that there were criminal elements across the country and that the youths had been directed to fish out the perpetrators of the destruction to face the law.

“We believe in the oneness of the country where justice and equity will thrive.

“We believe that together we will be stronger. I appeal to the Igbo youths across the country not to join the protests further.

“They should not allow anybody to use them in terming the protests an Igbo affair,” Umahi said.

Umahi who described the period as a trying moment for the country urged the citizens to toe the path of President Muhammadu Buhari who had spoken in the nation’s oneness.

“The President has encouraged us, commiserated with families of all those who lost their loved ones including security agencies while we should give him time to address the protesters’ demands,” he said.

The governor expressed dismay over the wanton destruction of properties during the protests, noting that youths should not destroy properties which belong to them.

“I will not reconstruct or repair any property that was destroyed except the people identify the culprits for them to face the law,” he said.

US navy denies carrier group moved into Gulf after any 'threats'...
Read More...